The energy, inspiration and commitment of the Sodexo teams in 25 countries have resulted in a very significant contribution to STOP Hunger: almost half a million meals were served in 30 days during Servathon, making it one of the most successful to date! Discover all the results below 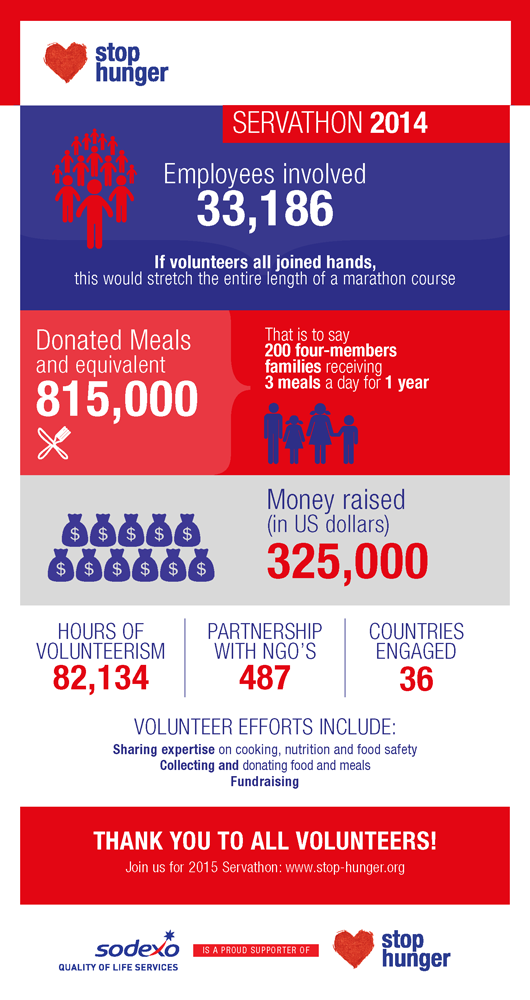 Sodexo’s commitment to STOP Hunger will not stop after the Servathon. Over the course of each year So-dexo engages in a number of efforts to fight hunger. In addition to collecting food and securing financial donations for food banks, Sodexo employee also offer innovative efforts such as educational programs that teach people how to prepare healthy, balanced meals on a budget. Sodexo teams also share their expertise with organizations and associations regarding food safety; and works to increase awareness and end practices that contribute to food waste.
Rendez-vous in 2014.

What happened during 2013 Servathon

Peru
In alignment with the United Nation’s Food and Agriculture Organization (FAO) designation of 2013 as the International Year of Quinoa, Sodexo employees in Peru developed a number of activities to promote and educate people about the superior nutritional characteristics and health benefits of this hardy food and the potential role of quinoa in the achievement of the UN’s Zero Hunger Challenge, Millennium Development Goals and as an important component of post-2015 development strategies. Sodexo chefs brought their culinary expertise, teaching 334 people how to prepare dishes based on quinoa. They also donated and served meals based on quinoa to several schools.

United Kingdom
In addition, a team of Sodexo volunteers helped serve food at a picnic event as part of the Everton local community program. It was a joint event between Everton Football Club and Sodexo. 2013 STOP Hunger fishing day (fishing competition) organised with the support of the supplier Rogby Taylor.

USA
Sodexo employees used Servathon to connect with young people, 34,216 of whom joined in activities rang-ing from collecting and serving food to raising money and awareness about the issue of hunger. On Global Youth Service Day (April 26 - 28) Sodexo teams across the country supported youth-led activities funded by Sodexo Foundation that were aimed at addressing childhood hunger. For example, in Tulsa, Oklahoma 13-year-old Remmi Smith coordinated the No Kid Hungry Food Classic, an event that incorporated healthy cooking demonstrations and gardening tips. Learn more

Colombia
Sodexo employees volunteered their time in wide variety of efforts. In Medelin teams collected food, participated in a STOP Hunger Bingo game and even cleaned the offices for the Banco Arquidiocesano de Alimentos foundation. In Barranquilla Sodexo chefs donated their time to teach people how to cook and other volunteers spent time with children and elders. In Bogota employees raised needed funds and volunteered to put on a barbeque for local children. Sodexo volunteers donated their time to share their knowledge about nutrition with people in Medellín, Barranquilla and Bogotá.

Mango Mania in India
Mango Mania is a unique initiative offering premiere-quality, carbide free, organic mangoes attractively packed and sold in the Sodexo offices in Mumbai, Pune and Bangalore and client sites including IBM, Accenture, Osho, American School of Bombay, Technova, and JSW. The proceeds raised needed funds for NGOs working towards ending hunger and helping the less fortunate. Customer and client response was very favorable, combining the opportunity to help others in their community with enjoying a healthy and delicious fruit.

And so many other initiatives!

Sodexo organizes the STOP Hunger Servathon each April, an operation that mobilizes our employees to work in their communities and engage with local partners to help fight hunger and malnutrition. What are their plans this year?

We Are, We Do & We Engage: The basis of our strategy for Corporate responsibility.