With women making up 43% of its Executive Committee and 38% of its Board of Directors, strong women’s networks throughout the global organization and a commitment to gender equality at the heart of its strategy and performance, Sodexo is at the forefront of the SBF 120 French stock market index in a ranking released today by the French government (the Palmarès de la féminisation des instances dirigeantes). 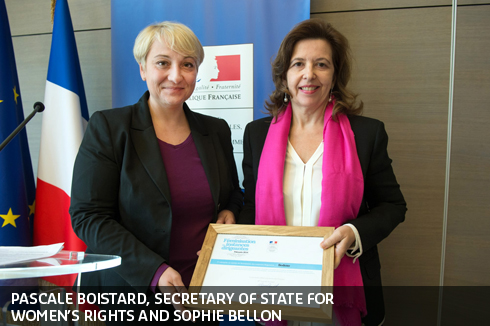 Michel Landel, CEO of Sodexo, said: “I am pleased and proud on behalf of the whole Group to be recognized by the Ministry of Women’s Rights for our diverse leadership team. What gets measured gets done. This truism is emblematic of our approach to gender balance at Sodexo – we measure our progress year-on-year and have made important strides towards gender parity at all levels of the organization. By tapping into the full potential of both genders, Sodexo will be more innovative, stronger and a better performer.”

Sophie Bellon, Vice Chairman of Sodexo’s Board of Directors and Sodexo Group Special Advisor for Research, Development and Innovation, who received the award from the French Minister of State for Women’s Rights Pascale Boistard, said, “It was a great honor to accept this accolade on behalf of Sodexo. I want to tell the women of today that leadership jobs are within their reach, and the corporations of today that gender diversity is more than just a source of creativity and balance, it’s the future of management. It was wonderful to see so many top companies demonstrating their commitment to feminizing their leadership this morning.”

During her remarks, Sophie Bellon highlighted the importance of SWIFt, the Sodexo Women’s International Forum for talent, in driving Sodexo’s journey towards greater gender diversity.  Launched in 2009 by Michel Landel, SWIFt brings together 35 senior leaders representing 15 different nationalities and all areas of the organization, to focus on increasing women’s representation in leadership positions. SWIFt proposes tangible initiatives that have led to the progress recognized by the French Ministry of Women’s Rights today.

More information on Diversity and Inclusion at Sodexo here.

Please send your inquiries, including feedback and requests for information.