Sodexo’s Annual Shareholders’ meeting was held on January 22, 2019 at La Seine Musicale, in Boulogne-Billancourt, and was chaired by Sophie Bellon.

Quorum was established at 82.9%, and 1,277 shareholders were present, represented or voted by correspondence.

All the resolutions put forward by the Board of Directors were adopted, notably:

On this occasion, Sophie Bellon warmly thanked Bernard Bellon, member of the Board of Directors since 1975 whose mandate ended today, for his contribution to the Group's major milestones.

The Sodexo Board now comprises 12 Directors including two employee representatives. Five Directors are considered independent as defined by the AFEP-MEDEF Code of corporate governance for listed companies. The Board continues to be gender balanced with seven female Directors and five male Directors, and represents four different nationalities.

The detailed results of the votes will be available on Sodexo’s website as of January 28, 2019 in the section “Finance – Shareholders – Shareholders’ meeting”.

To read the full version of the press release, please download the PDF: 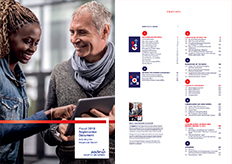