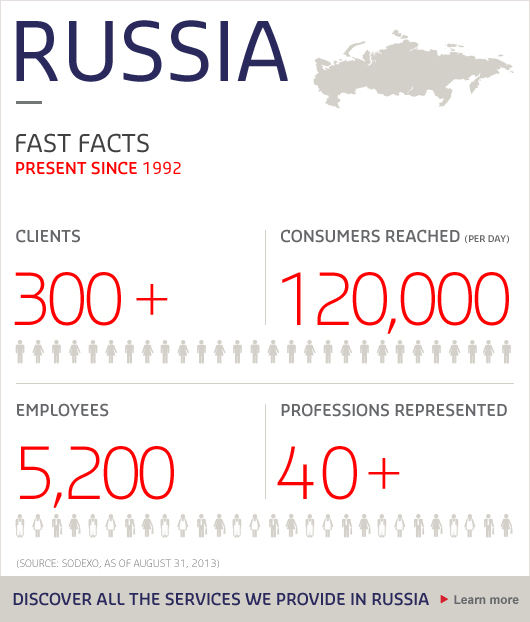 While well-established and thriving in Remote Sites and Corporate fields, Sodexo is also working to develop its business in Education and Health Care too, in part because of increasing government willingness to partner with the private sector. Says Edi Perisic, CEO of On-site Services, Russia, “Since 2009, 2010, we have observed that Russian companies linked to the state have started outsourcing, in order to increase productivity and focus more on their core business. This has been a real revolution as traditionally, Russian companies prefer to maintain control of the entire process.”
In 2012, GazProm, Russia’s oil & gas giant, decided to embrace the outsourcing trend. When Sodexo took on the responsibility of modernizing the services that deliver workers 25,000 meals a day for truck manufacturer Kamaz, the challenge was to integrate the 400 Kamaz employees while maintaining productivity. “In fact, productivity was improved,” says Edi Perisic. “We took the team, the managers, trained people, reorganized the structure, implemented our processes, and within two months we saw a significant increase in the number of people eating in the restaurants. Our global and proven expertise makes us an ideal partner for companies willing to make the switch.”

With its burgeoning consumer market, Russian employees are becoming more sensitive to quality of life issues. “The Quality of Life concept is very important today, as Quality of Life services have a direct impact on the engagement of our people and our clients’ people. With low unemployment rates around the country, they also become a motivation tool enabling our clients to retain their staff” says Edi Perisic. For Sodexo’s Benefits & Rewards Services team, these motivation tools take the form of gift or meal passes, like the multi-branded restaurant pass, which can be used in 800 partner restaurants in Moscow and Saint Petersburg. According to Anna Thomas, Marketing Manager for Benefits & Rewards Services, this market is still young; “the concept of meal and gift vouchers is a relatively new one in Russia.” Vladimir Lysenko, CEO for Benefits & Rewards Services, adds that because the market is in its early stages, Sodexo is sought after for market advice: “We often play the role of consultant searching how to be more competitive in finding, recruiting, keeping and developing talent.”

In dynamic Moscow, with its population of almost 12 million, offices are organized into business centers and workers often eat lunch in the business center canteen. Meal Pass offers choice and flexibility - crucial in Moscow, says Anna Thomas, “where traffic is really bad, so if you have a meeting out of the office, you could wait 2 hours in traffic to get back to the canteen. Having a meal pass means you can eat wherever you are in the field.” Northerly, industrial St. Petersburg has different needs from Moscow, as blue-collar workers have limited time for lunch, and are less likely to brave colder temperatures outside. Here clients have had success with Gift Pass as a way to motivate employees, with a marked preference for local shops and local brands.

A leading light for women-friendly workplaces

As in other countries, Sodexo Russia points to the importance of its people in its success. Gender diversity is particularly strong – Sodexo Russia is really a poster-child for female advancement in the workplace. Of a total workforce of 5,127 employees across the country, 82% are women. These figures are partly rooted in history, but Sodexo’s women-friendly workplace goes beyond demographics, with programs like the one offering flexible hours to female workers caring for children and seniors. Such programs are having a positive effective on the advancement of women: a whopping 361 women - compared to 112 men – hold managerial positions such as site manager, administrator, or production manager. Four out of the six members on the Executive Committee are women too. Clearly, when it comes to promoting women workers, Sodexo Russia could teach its European neighbors a thing or two.

> Discover what we do in other countries

Women’s Forum Global Meeting brings together more than 250 speakers and over 1,200 participants from all over the world to create a space for women to discuss ideas and learn from each other. Since 2007, Sodexo’s commitment to gender balance has made us a natural partner to the Women’s Forum.